As a little boy, my paternal Grandmother told me that her Dad and his family built lots of boats, but it wasn't until I was near retirement and living in Caporn St. in rural Wanneroo I discovered that her Grandmother was a Caporn.

Checking around, I found that that family had played a significant role in the early years of our Swan River Colony especially on the river its self.

It was whilst chatting with Jules recently on a Freshy trials event that I brought up the Caporn subject,  He found it interesting and you can blame him for me getting up here tonight.

So who were the Caporns ?  ( and here, I acknowledge the work of  Yvonne Coate in her comprehensive book on the Caporns and Keith Murray's book  'From Oar to Diesel on the Swan').

They were a Huguenot family kicked out of France following the repeal in 1685 by Louis 13th of the Edict of Nanttes which had allowed Calvinists (otherwise known as the reform church) political freedom. The Huguenots dispersed to many countries.

when their first children were born. -  Sam and Ann were my Gt Gt Gt Grandparents.

An educated man, he then took up a position at a Thame Union workhouse in Buckinghamshire feeding and doling out relief to the poor.  -  On the 13th April 1842 following the death of two of their children from Typhus, he handed in his resignation and on 26th April, with his family left on the 431 ton 'Simon Taylor' for the Swan River Colony.

219 sponsored migrants were on board as were about 18 'Parkhurst Boys', these were youths from the Isle of Wight prison. (which poses the question, 'were these youths actually our states first convict immigrants? Or our first child migrants?)  Sam was to supervise these youths and also fill the roll of educator aboard.  For these services he was paid the princely sum of 4 pound .

On 20th August that same year, the Caporns arrived at Fremantle and after some time as a

Being a shrewd man Sam realised the importance of river transport to the new colony, he established a half-way river house and obtained a liquor licence. - Sam called the establishment 'The Watermans Retreat', but it soon became better known as the 'Cape Horn Inn' where a weary boatman could get a drink - or two.  (some of its timbers are still occasionally visible near the beach).

To enhance his trade, make an extra penny and cut almost 2 miles off the Perth to Fremantle run, he and his boys maintained a channel cut through the base of the Point Walter spit and we believe, charged for its use.

The Caporns had about 9 surviving children.  Sam ensured that all his sons became various

classes of boatmen and all his daughters married shipwrights, naval architects and ships

the Swan and Canning.  They ran mail from Perth to Fremantle daily in 2 man rowing gigs sometimes taking paying passengers.  Some plied the coastal trade. Another introduced England to Jarrah, known then as Swan River mahogany, extolling its durability in boat building.

Before C.Y. O'Connor constructed Fremantle harbour, there was a rocky bar across the mouth of the Swan.  The Caporn boys are recorded as having had a couple of unsuccessful attempts at blasting it.

Some shallow draft lighters could negotiate a gap in the bar when tides and conditions were favourable so ships in Cockburn Sound could be serviced.

Other goods, when conditions allowed,were unloaded from ships berthed at 'South Jetty' on the seaward side of Arthur Head, put onto oxcarts and then reloaded onto barges at the 'North Jetty' which was inside the river mouth across Arthur Head.

In 1864, a most unlikely event took place involving a convict by the name of Wildman.  He had been convicted in England for being in possession of gold nuggets which he could not account for and was deported to serve a long sentence.

He told the authorities here that he found the nuggets in the Kimberley whilst crew on a Dutch ship which called there for water and he offered to divulge the location of the gold if they would commute his sentence, an expedition was arranged. It was to be headed by a police inspector Panter.

With Captain William Outram (a Caporn son-in law), and a crew of Caporn boys and sons -in -law, the 'New Perseverance' sailed to Camden Harbour.  On arrival, prisoner Wildman refused to go ashore and was secured aboard, presumably with bread and water whist the crew explored ashore.

The party found no trace of gold, but because it was just near the end of the wet season, reported boundless lush pasture land worthy of a settlement.  A consequent attempt at a settlement became a disaster resulting in the deaths of many settlers and the loss of all stock to natives, dingoes and disease. The remains of buildings can still be seen there as can the cemetery on Sheep Island,

It is interesting to note that on older maps of our state, there is a mountain range about 60 kms inland from Camden Harbour with the name of the 'Elizabeth and Catherine Range' which were the names of two of the Caporn girls.

Whilst they were ashore, Wildman escaped in the ships dory and after searching the maize of islands in the archipelago they found him.

They had an adventurous return journey searching for the lost Robuck Plains exploration party, who by the way were never found & checking on the Withnells the first settlers in the N/W at Nicol Bay who were trying to establish a pastoral station - and  Oh! - Wildman ? he copped an additional sentence.

He died on the 22nd Feb. 1868 at age 74 and was buried at the Skinner St Cemetery where John Curtin High School now stands.  His and Ann's headstones were subsequently moved to the pioneer section of the current Carrington St. cemetery.

On 26/2/1868 the 'Enquirer' reported among endless compliments as to his honesty and energy that:

A voluntary public subscription was raised for him and Ann to have a substantial tomb erected.

Of course the Caporn name is now all over Australia, but they are all descendants of Sam and Ann.

A footnote, and another story for another time:

In March of 1844 a young American Whale boat puller and apprentice ships carpenter deserted the whaling ship 'Florida' at Albany.

Amazingly, he managed to walk through the bush to Perth.  Bedraggled, he stumbled into the 'Cape Horn Inn' at Point Walter and the Caporns took him in.  He married Bessie Caporn.

The name he gave was William Lawrence :-   Meikle, Craig and I still have Lawrence boats.

He was my Gt Gt Grandfather. 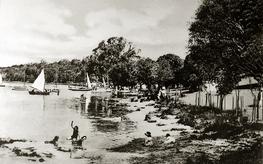 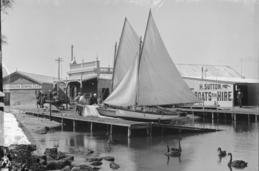