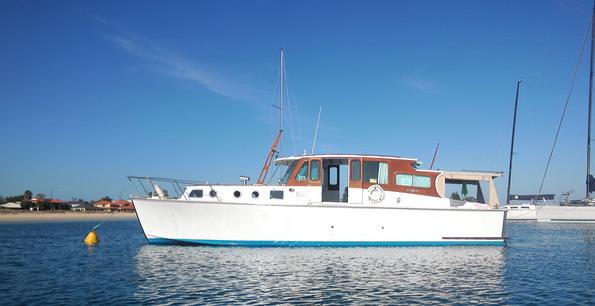 Built in 1943 Karrawa began life as 08-41. She was one of 147 38’ launches built by the Sydney boatbuilder, Lars Halvorsen, as part of a wartime contract for the Department of Munitions. Forty three of these 08's were constructed for the RAAF. Karrawa served the nation as RAAF crash boat 08-41, a speedy coastal rescue craft and seaplane tender. She was stationed at Point Cook in Victoria, then Rathmines on Lake Macquarie and lastly at RAAF Station Richmond in NSW. Originally she had twin Chrysler Royal straight 8 petrol engines and was capable of travelling at 28 knots. She has a double diagonal oregon plank planing hull.

In May 1955 she was sold by the RAAF to begin her life as a private launch purchased by Ernie Tomlinson. Tomlinson added the present superstructure to Karrawa and had her fitted out by Len Back at North Fremantle. The forward cabin, with its two bunks and head, is original, but the wardrobe and drawers were added. She was kept in the middle boatshed below RFBYC in Freshwater Bay until the early 1980s. For many years Karrawa was the fastest private boat on the river, holding the speed record between Fremantle and Rottnest until 1974 when her petrol engines were replaced by two 115 hp Perkins diesels.Following Tomlinson, she has had seven owners in Western Australia; Bob Angell (1961-70), John Stewart (1970-83), John Kruiskamp and Gordon Traill (1983), DD Brown (1984), Barry Newton (1984-88), Ralph Brockman and Colin Wright (1988-93), Ross and Jenny Gregory (1993-2009), and the present owners Robert Bingham and Ashley Wilson (2009-). Since February 2010 she has been on a hardstand at Maylands Amateur Boatbuilding yard under going repair and refurbishment. Current repairs include replacement of the forward 2/3 of the hull above the chine on the starboard side, assorted frames, replacement of the transom, general repairs to rotten timber and painting. Type your paragraph here.